AMM is OPEN for all the families. We have implemented all the safety precautions outlined by Texas Health and Human Services and CDC. Read More... 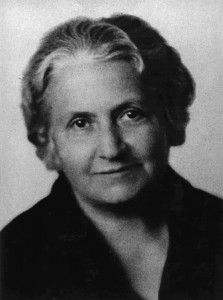 Maria Tecla Artemesia Montessori was born on August 31, 1870, in the small town of Chiaravalle, Italy. She grew up in a middle-class family with well-educated parents, she too, being well-educated and an avid reader. Maria Montessori was the first woman to enter medical school and practice medicine in Italy. She later became an educator and is now best known for her writings on scientific pedagogy and the philosophy of education that bears her name. Based on her observations and experimental research in schools, she realized that when children are provided ‘an environment’ where activities are designed to support their natural development, they make extraordinary progress. This progress manifested itself, among other ways, as children reading and writing at a very early age. Her educational method is in use today in numerous schools around the world.

As a physician, Dr. Montessori had children for patients and became profoundly interested in their development. Through careful and exhaustive scrutiny, she realized that children construct their own personalities as they interact with their environment. The thirst for knowledge took root in young Maria, and she immersed herself in many fields of study before creating the educational method.

Her approach to education stemmed from a solid grounding in biology, psychiatry and anthropology. She studied children of all races and cultures in many countries around the world. She started her first classroom “Casa dei Bambini” or Children’s House in 1907. The school enabled Maria Montessori to create the “prepared learning” environment she believed was conducive to sense learning and creative exploration. Teachers were encouraged to stand back and “follow the child”—that is, to let children’s natural interests take the lead.

In the years following, and for the rest of her life, Maria dedicated herself to advancing her child-centered approach to education. She lectured widely, wrote articles and books, and developed a program to prepare teachers in the Montessori Method. Through her efforts and the work of her followers, Montessori education was adopted worldwide.

Further reading on the Montessori Method and Philosophy:

The Absorbent Mind
by Maria Montessori, John Chattin-McNichols (Foreword by)

The Secret of Childhood
by Maria Montessori

Discovery of the Child
by Maria Montessori